Any developers or programmers, or even marketers would not be strange to the data type – JSON. It’s one of the most popular and awesome data serialization languages. In fact, there is an alternative called YAML. I believe people who are familiar with Google ads API must know this data type. In this Python knowledge hub, I would elaborate what are their pros and cons respectively, and how you can better leverage them as a developer and marketer.

JSON vs YAML – What is JSON

JSON has a standard format for data storing. It stores data in key and value pairs. The records are separated by commas and both field names and strings are enclosed with double-quotes. Tons of platforms and channels like Google, WeChat, etc leverage JSON to communicate with client-side and server-side. One of the most popular applications is API data transfer.

For more details regarding JSON converter, please check out this article

JSON vs YAML – What is YAML

YAML is the short name for yet another markup language. It uses three dashes (—) to indicate the start of a document and three dots (…) to indicate the end of a document. Unlike JSON, YAML uses the indentations just like in Python to show the levels in the data. The key and value pairs are separated with a colon and the lists begin with a hyphen in YAML. And also YAML files are written with the extension YML in some places and both.YAML and. YML means the same file type.

Take Newyork Times API for example. Its API specification documentation is in the YAML format. People can transfer the API spec information to others using YAML. 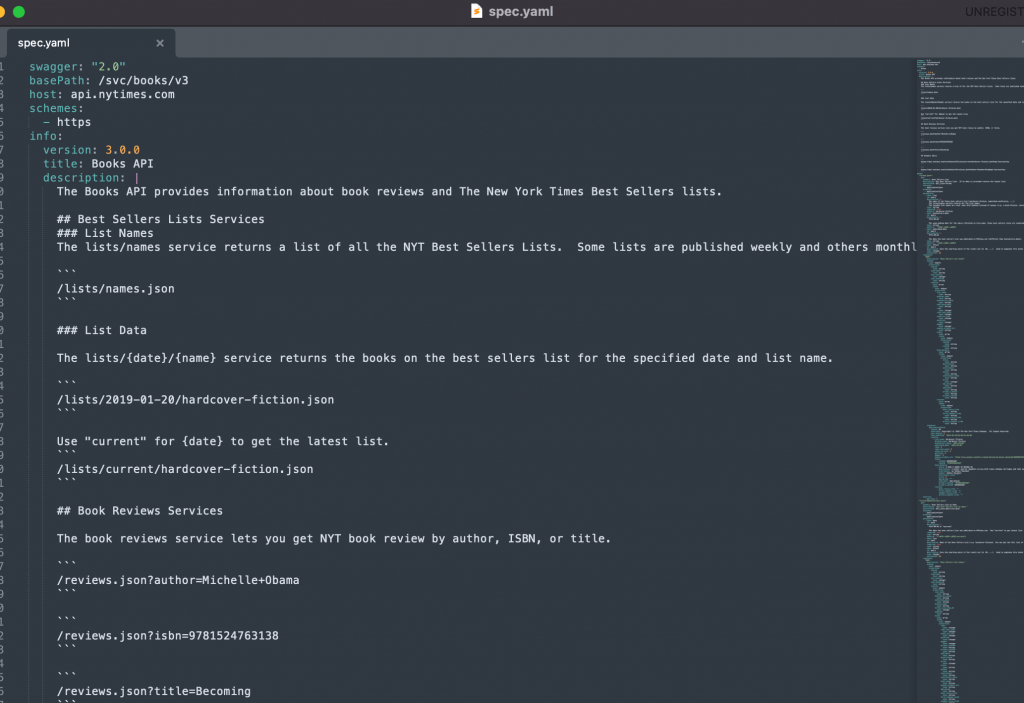 JSON vs YAML pros and cons

JSON and YAML are not as simple to compare as we think. But in terms of the purpose of both language, essentially both data serialization language aims to provide easier communication and human-readable interchange language.

In the data serialization contest, JSON is the winner because of the ability to quickly and easily parse JSON serialized data with its simpler design. And this has made JSON more popular among developers which results in more and more native support and this has improved the performance once again.
Therefore JSON has become the most widely used data interchange format for web applications and web services.

The design goal of JSON is to be as simple as possible and be universally usable. In contrast, the design goal of YAML is to provide a good human-readable format and provide support for serializing arbitrary native data structures. This has increased the readability of the YAML files, but it has made the parsing and generation of files somewhat complex.

We can see this clearly on the YAML official website where it shows the content in YAML format: It is easily readable for anyone visiting the site. On the other hand, if it was displayed in JSON format, the webpage would be useless.

There is a saying that YAML is a superset of the JSON format. We can parse JSON using a YAML parser. However, in practical scenarios, this parsing may raise problems, so it is theoretically possible.

Another feature that YAML provides is the ability to reference other data objects. With this referencing, it is possible to write recursive data in the YAML file.
Because of this, people can define anchors in the YAML file using & and refer to them later using aliases, *. This is a very important feature in YAML that JSON does not offer.

In JSON, it is impossible to serialize complex structures with object references. But the above feature in YAML solves that problem, although it has one drawback of this which is the possibility of infinite looping in some converters.

For any programming language, we can easily find a JSON library and stackflow discussion that integrates with any language. It’s thanks to its popularity, its ease of implementation, and simplicity. Also, the majority of APIs are using JSON to implement the data interexchange. The JSON official website lists many languages with many supporting libraries for JSON.
On the other hand, although YAML also has widespread support and many libraries for integrating it with various languages, but not as much as JSON. You can get the list of libraries and languages that support YAML here.

Currently, we discussed the pros of JSON and YAML are tied. But some considerably important features of YAML are that JSON doesn’t have. Its YAML supports comments where JSON does not.

We can comment anywhere in the document with a simple # character. This has proven advantageous when writing configuration files where one developer can easily describe the configuration using the comments. Therefore YAML format is used in many technology stacks like ElasticSearch, and Docker for storing configuration information.

So from all these points, we can see that both JSON and YAML have their own strengths and weaknesses. A good developer should be able to identify these and use the correct format in the correct place.