One of the main Web3.0 product value propositions is payment decentralization from the central bank using Cryptocurrency and Blockchain. The value is kind of imaginable because you can send or receive money using your own developed Crypto payment gateway. Moreover, the traditional bank system is unlikely to record all transactions straightforwardly. That implies quite a lot in fact in terms of business assets and financial operations.

In this article, I’m going to share a Brownie FundMe smart contract and go through how to deploy it onto an Ethereum network.

First thing first, we create a smart contract that can process fund send or receive and add under the new Brownie project. There has been a smart contract developed by us before. If you are interested in, please subscribe to the Easy2Digital newsletter by leaving a message “Brownie FundMe smart contract script”, and we’ll send you as soon as possible.

External 3rd party repository sources and data feeds are not readable by Brownie if you just add them to the smart contract. Here are the components added for connecting with external sources as follows:

1. Create a brownie-config.YAML and add dependencies – organization and version

First thing first, we need to add a configuration YAML file under the root directory. Namely, this file tells Brownies there are some internal or external sources to connect. In our case, we use Chainlink.

Please be sure to check the brownie smart contract’s latest number, which here is 0.5.1. It’s because it tells brownies which version we’re connecting to. For more details, just do a search in Google and it will pop up. So here is the code sample in the YAML file as follows using dependencies:

After having set up the destination, we need to tell Brownie which module we like to map with the external source. As you can see in our completed Brownie FundMe .sol, we use @chainlink in the module import section

So here are the codes as follows for mapping with the external source using compiler, solc and remappings

Please be sure to check the version of the external source if it matches the version or is within the scope of the version you are using in the smart contract. For example, we are importing the V8 version of the interface and the solidity version range should cover V8 as follows:

Once things are completed as mentioned earlier, we can input brownie compile and it depicts that the project has been compiled. Then, you can see there is a new JSON file added under the contracts folder.

In the previous chapter regarding Infura and Metamask, we created a get_account function in the Python deployment script. This function is used to get the specific cryptocurrency account you like to interact with your smart contract. As well as a general Python functional import approach, Brownie also provides a script folder for anyone to add any scripts needed. These scripts can be connected with each other as well.

Here are the codes of get_account function script which is the same as the one used to connect with Ganache CLI.

Once the script is created and saved under the script folder, we can import the function in the deploy script as follows:

As highlighted in the code above, please check out the previous article as follow if you have any questions regarding how to create and add wallets, from_key, and .env. They are used to connect with your real wallet in a safe mode.

Or you can go down to the end of this article and subscribe to the Easy2Digital newsletter for the full script.

Last but not least, please be sure to add a Python script named as follow. It tells Python it can import modules with each other.

Verify your Smart Contract on the Etherscan

If we like to check whether our FundMe smart contract verification is valid on the Ethereum network (Note**. Please be sure to deploy the settings that are the same as our scripts, there are a few steps needed as follows:

Step 1: Create an Etherscan account and gain the API Key

Go to etherscan.io and sign u for a free account. Each account has 5 free API keys. After having signed up, please copy it in advance and you will use it in a moment.

As well as setting up your private key, we would put the Etherscan key to .env as well. Thus, here is the code as follows you add to the .env file

Lastly, please run the script in your terminal again and you would see pass and verified once your smart contract is uploaded to the Etherscan network successfully.

Add parameters in the constructor in the FundMe Smart Contract

Sending or receiving funds necessarily shows the real-time currency exchange rate and the funder’s & senders’ address. Thus, before deploying functions for this feature, we need to set the price feed parameter in the constructor, which is address and _priceFeed. Here is the updated constructor code sample in the FundMe smart contract as follows:

If we are only on the goerli blockchain network, it’s just for us to use an associate address. But how come we like to set either or, or multip networks that include testing networks and real networks? In this case, we need to deploy mocks.

Step 1: Add the network dataset that includes the ETH to the target currency price feed

First thing first, we need to add a test folder and a mock .sol contract under the test folder. For this mock smart contract, please subscribe to the Easy2Digital newsletter by leaving web3 tutorial 4, we’ll send you asap. 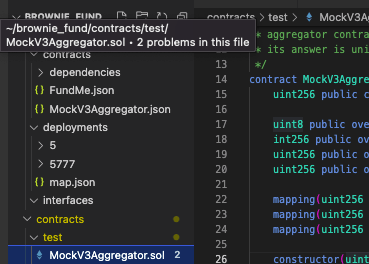 Then, after having compiled again,  in the YAML file, we will add one more network called development and the verify should be False because it’s a local testing price feed data.

Additionally, as well as importing FundMe, we need to import MockV3Aggregator and write code in the else section, which means it’s a development mode.

Here we create a function deploy_mock() in the get_account script, which uses Mock contract if it’s a development mode  as follows:

Apart from the existing network Brownie provides, we can add a new network needed, for example for testing purposes.

Here is a sample of adding a ganache-local network in the terminal:

By default, Brownie uses the development mode network. As now there is one more local network added, we need to update the variables to justify the execution

Under the script folder, we create a fund and withdraw script. Here are the functions as follows:

If you are interested in Brownie FundMe Smart Contract Deployed on Ethereum Using Python & Web3, please subscribe to our newsletter by adding the message “Web3.0 tutorial 4”. We would send you the script immediately to your mailbox.

I hope you enjoy reading Brownie FundMe Smart Contract Deployed on Ethereum Using Python & Web3. If you did, please support us by doing one of the things listed below, because it always helps out our channel.